While I probably won’t get around to posting my entry until later in the month I thought I’d quickly promote the November Blog Carnival which is being hosted over at Nearly Enough Dice, the other site that I occasionally blog at. The topic is Gunpowder, Treason and Plots in honour of Guy Fawkes Night here in the UK.

This month’s RPG Blog Alliance Carnival topic is Summer is Coming, hosted over at Dice Monkey. Here in the UK I can say, with some certainty, that Summer is most definitely here (we’ve just had our hottest day so far this year). Having gotten into RPGs while at university, and still being friends with a number of university students summer is also a period I associate with less gaming as campaigns always tended to wrap up just prior to the exam period. So with that in mind I thought I’d present a few suggestions for games that can be run in a fairly adhoc manner, without the need for a regular group meeting each week for a continuing story.

So there you have it, a few options for your summer gaming. If anybody has any additional recommendations then I’d be eager to hear them as it looks like my summer is once again going to be dominated by one offs and irregular games.

Arcane Game Lore hosts this months RPG blog carnival and asks “Who’s your favourite NPC?”, a question which can be applied to both GMs and players. This isn’t a particularly easy question for me to answer, not because I have too many to chose from but because the majority of my games tend to focus heavily on intra-party issues, with few NPCs that get enough scene time to make a significant impact. Truth be told my NPCs are one of the biggest areas of my GM style I’d like to improve upon, but that’s a post for another time. So after some thinking I’ve come up with two favourites, who made the cut for very different reasons.

The first comes from my first Serenity campaign, which was the first campaign where I’d applied a very freeform (but not quite sandbox) approach focused purely on the goals of the PC characters as opposed to a save the world big issue type of campaign with clear aims and objectives. While the scheduling of the game was cursed (and we never did get as far into it as I’d have liked) it stands as one of my favourite campaigns as when it did run everything just slotted into place, including Alex C, a record producer at Blue Nova Records. For the most part Alex was an over the top, flamboyant character who used buzz words and three letter acronyms like they were going out of fashion. The thing is, it was all an act, something which only showed during a few occasional moments with Xoxi, one of the PCs and Alliance intelligence officer who was working at Blue Nova undercover while she dealt with some particularly nasty psychological trauma.

We never got far enough into the game for much to be made of Alex and his background but he did manage enough screen time for the hidden side of him to show and demonstrate he was more than first appearances would suggest. One of the plot threads I had started hinting at was some internal turmoil occurring within Alliance intelligence, triggered as a response to the events of Serenity (the movie). If we’d have continued then Alex would have been central to that, either by turning up dead somehow or by seeking the assistance of the PCs in evading / foiling particular events. Maybe, if I ever run another Serenity game, he’ll show up again though I suspect that may be a while away.

My second favourite NPC is a character I’ve mentioned repeatedly in previous posts, as he went on to become a PC and one of the pregen characters for my Nationals Demon Hunters game.

Yup, Doyl Levett, caffeinomancer extraordinaire. Doyl started off life as an NPC in my very first Demon Hunters game, with the chapter not only finding him lost in the middle of the Warehouse but with a group of ROUS close behind him. While not a member of the Brotherhood at that time his basic character was already there, a coffee mage (though he didn’t know it) who had stumbled into the Warehouse by accident. From there it was simple to convert him into a full PC when I finally managed to play in a game of Demon Hunters and he quickly turned into one of my all time favourite PCs to play, with the added bonus that it lets me drink copious amounts of coffee and claim that I’m just acting in character.

For May’s RPG blog carnival Age of Ravens asks: What campaign would you like to run? Like anybody who has spent more time behind the GM screen than in front of it I could point to a wide range of systems and settings that I’d like to run but campaigns, they’re a little trickier. To me asking what campaign I’d like to run goes beyond a simple multiple session adventure (or series of adventures), a campaign to me is something that envisages a long term game with an over arching theme from the start, antagonists with long term goals and NPCs / factions that have time to develop in response to the actions of the PCs.

So what campaigns would I like to run then? Well I’ve got 3 that immediately come to mind.

February’s RPG Blog Carnival is being hosted over at Arcane Shield and this month the topic is to simply pimp that game you love, the system you come back to time after time.

For me the choice is simple. Cortex. The system has already received some love from The Chindividual where he shares his love of Cortex Plus (which powers Smallville, Leverage and Marvel Heroic). But that’s not the version I want to focus on, no the system I want to focus on is standard Cortex, which was used for Serenity, Battlestar Galactica, Demon Hunters, Supernatural and the generic Cortex System.

But why do I love it so? Well first off it is simple yet highly versatile. The core mechanic sees both attributes and skills defined as a particular sized die (with bigger being better) with rolls constructed by rolling the required attribute + skill then adding up the total. So it’s extremely simple to learn the basic system, but what about the versatility I mentioned? That arises from the fact that skills are not linked to a single attribute and can instead be matched up as required.

As an example lets imagine an investigator PC who has just arrived at a crime scene and is looking for clues. If they’re just having a simple look around then they might be asked to roll Alertness (Attribute) + Perception (Skill). In doing so they observe that the room appears to extremely secure, so they’re wondering how the criminal might have gotten into the room. The GM, therefore, asks for an Alertness (Attribute) + Covert (Skill) to see if the PC can spot that the window has been rigged to allow it to be opened from the outside. Now knowing how the burglar got in the investigator is wondering what was the reason for the break in, so they make a final roll of Intelligence (Attribute) + Perception (Skill) to see if they can deduce why the room was targeted based on its contents. The same concept goes for any roll that is called for, adapting to suit the situation as it evolves. 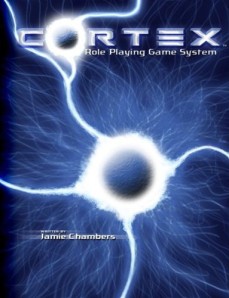 The simplicity and versatility aren’t the only reasons I love the Cortex System. The variable size of the dice means that its difficult to play the curve and predict your chances of success while the inclusion of these dice to roll defence scores means that even a low level character has a chance if their opponent rolls badly. Absent is the issue of low level NPCs who can’t harm the party or PCs who can’t get a lucky shot on the big bad evil guy. At it’s base characters are not the great hero’s of D&D or Pathfinder, this is a system where PCs are as fragile and as fallible as everybody else in the world without falling over the moment they take a single wound. As a GM more interested in near future and Sci-Fi settings than heroic fantasy this balance is ideal for the stories and settings I prefer to employ. This isn’t to say that mechanisms to pull off spectacular successes are absent. The advantage system provides quick bonuses that, depending on your genre, can either boost skills (providing relatively small bonuses) or add additional dice (allowing for extraordinary feats) while plot points (akin to bennies in Savage Worlds) allow for the boosting of rolls in tense situations (and unlike Savage Worlds are provided in sufficient quantities during a session that you don’t need to save them just in case you need to soak damage). Again, simple yet versatile.

I’m not going to lie and pretend the system is perfect, the Battlestar Galactica and Supernatural variants for example were little more than reskins of Serenity with little work done to adapt the rules to the genres (something Cortex Plus does superbly). I hope however that this little blog post will have tempted you to give it a try, the generic rules set (and a few of the other variants) can be found on DriveThruRPG and at $4.99 (at present) it’s an absolute bargain.